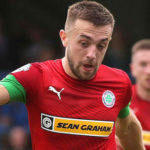 McMenamin was on Cliftonville’s Football Development Centre’s books as a youngster before making a move to Linfield, from where he made subsequent moves to Glentoran and Warrenpoint Town.

Having started out as a striker, Conor was redeployed to a defensive role at Warrenpoint but has since firmly established himself as an effective goal-getter from a wide-left position and has contributed a host of important strikes since his return to Solitude, most notably vital conversions against Coleraine and the Glens during the 2018/19 Europa League Play-Offs.