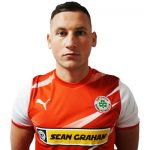 A scorer on his home debut when Cliftonville overcame Barry Town United in a Europa League tie, Conor’s second strike for the Reds earned global acclaim when he found the back of the Warrenpoint Town net from inside his own half in November 2019.