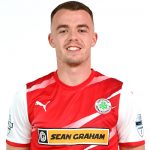 Another former Glentoran player in the Reds’ first-team squad, ‘Cricky’ – like ex-Oval team-mate Jamie McDonagh – only ever scored one Premiership goal for his previous Club and it came against Cliftonville.

A tenacious midfielder who likes to get forward, the 23-year-old made the move from east Belfast in the summer of 2021 and enjoyed a superb first season with the Reds, with whom he savoured League Cup success en route to helping the team finish second in the Danske Bank Premiership.