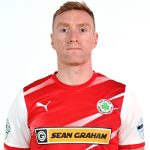 A member of the Ballinamallard United side which impressed during their debut Premiership season, the ex-Manchester United youngster’s signature was secured in summer of 2013 and he would mark his first campaign at Cliftonville with a string of impressive performances and vital goals – most notably the opener against Portadown at Shamrock Park on the day the Reds clinched the 2013/14 title.

Though he arrived at Solitude as an out-and-out winger, Curran – who was appointed Club captain in 2017 – has also excelled in a central midfield role in recent years and skippered Cliftonville to League Cup glory in March 2022.