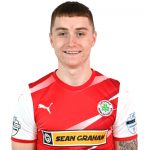 A player who made history when he became the quickest ever player to score on his Cliftonville debut by netting just seconds after emerging from the bench in a September 2019 County Antrim Shield clash with Knockbreda, an anterior cruciate ligament injury prevented Calvin from playing any part for the Reds in the 2020/21 season.

After returning to fitness, the striker enjoyed valuable exposure to regular football when he spent the 2021/22 campaign on loan at Lough 41 Championship side Ards before signing up for another loan spell – this time with Ballyclare Comrades – for the current campaign.