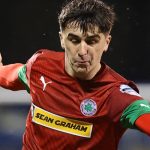 Barry, who is on loan at Cliftonville from Celtic, has featured for the Hoops’ Under-17 and Reserve set-ups since joining from hometown side Nenagh AFC in the summer of 2017 and enjoyed a pre-season run out with the Bhoys’ first team at the beginning of the 2019/20 term.

A Republic of Ireland Under-19 international, the Tipperary native featured at the Euro Under-19 Championships in 2019, scoring the winning goal in the group stage victory over Czech Republic that helped Ireland seal a semi-final berth.