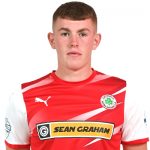 Skipper of the County Antrim side that performed admirably in the 2017 SuperCupNI, Donnelly had to be patient for an extended run in the Cliftonville side and caught the eye with a series of impressive displays during Levi Ives’ injury-enforced spell on the sidelines during the 2019/20 season.

Known for his effectiveness at both left-back and the centre of defence, Donnelly also shone in a midfield in the opening weeks of the 2020/21 term.