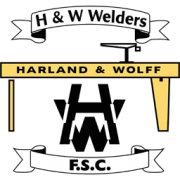 Cliftonville made safe progress to the third round of the League Cup with a 2-0 victory over Harland & Wolff Welders at Solitude this evening.

Goals from Ryan Curran and Levi Ives were enough to secure victory on a night that saw the Reds strike the woodwork three times in addition to having two efforts cleared off the line.

Boss Paddy McLaughlin made eight changes to the side that started Saturday’s encounter with Crusaders but it was one of the players who retained his place – Jamie McDonagh – who was first to threaten, only to see his fifth minute blast come back off the post.

Chris Gallagher then had a shot blocked before debutant Colin Coates deflected a Gareth Tommons drive behind.

On 20 minutes, McDonagh sent a free-kick straight at goalkeeper Ben McCauley, who made a superb save to touch an Aaron Donnelly strike over the bar as the first-half drew to a close.

When he was beaten by Odhran Casey’s header soon later, a combination of the post and defender Scott McMillan kept the ball out amid home claims that the effort had crept over the line.

Within a minute, however, there was no disputing a Cliftonville goal thanks to Curran’s smart volley from McDonagh’s corner delivery and it was almost instantly 2-0 only for McCauley to repel a McDonagh rasper.

The one-way traffic continued after the break and, after Daniel Kearns had thrashed a shot over the top, a Joe Gormley cross fell for fellow substitute Ives, whose strike was blocked on the line by McMillan.

Ives then had another attempt stopped by McCauley and then provided the delivery from which Gormley steered a shot wide before a rare Welders threat offered a glimpse of the scoreline’s precarious nature; Alan McMurtry coming within inches of drawing the visitors level.

Less than 60 seconds after that scare, the lively Ives rattled the crossbar with a powerful blast and, after Gormley and McCauley collided in their bids to seize on the loose ball, Paul O’Neill’s attempted follow-up was gathered by the keeper.

Cliftonville finally got the second goal their dominance deserved with six minutes left to play when Ives – superb from the very first second of his 59th minute introduction – got his reward when he planted a free-kick into the bottom corner.