Another day, another draw as Cliftonville and Linfield heroes of yesteryear played out an entertaining encounter at Solitude this afternoon.

Less than 24 hours after the sides had contested a goalless Danske Bank Premiership battle at the same venue, the Clubs’ Over-35s teams went head-to-head in a special fundraiser in memory of former Reds player Jerry Thompson, with photographer Damien Toolan on hand to capture the action.

George McMullan gets a shot away under pressure 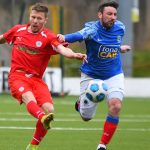 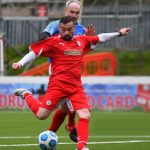 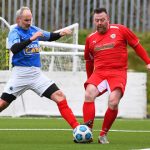 McMullan and Larry McMahon were the Reds goalscorers, with Ivan Sproule and John Martin on target for the Blues in an eye-catching contest that saw a number of famous faces roll back the years for a fine cause that you can show your own support to with an online donation.